Miss Vaginal Davis needs no introduction. She is a performance artist, painter, film actress and fashion icon. She has been a part of several bands, made tons of zines and participated in shows all over the world. She recently did a performance at MoCA. She is a creative powerhouse and a glamour girl. We had a chat about fashion...
S: Miss Davis, you've had so many iconic looks over the years, is there one you feel is your signature?
VD:I don´t really have a signature look. When I first started doing drag as a teenager I wanted to differentiate myself from the olde school of drag and be more androgynous in my appearance. Now that I am older I have reverted to a more classical approach in look and style. Some looks that have gone over really well are my Bricktop look of a rust colored bob haircut and 1920s or Tin Pan Alley clothing. The Edwardian era and the Jazz Age are a fantastic period for my body type. During the run of Bricktops at the Parlour Club in Los Angeles from 2002-2005 I became closely identified with a new movement of heritage dressing. Also my look on the cover of Jose Munoz´s book Disidentifications where I am parodying Ciccolini aka: Ilona Staller the former Italian Parliament member, porn model and wife of art star Jeff Koons.

S: One thing that is amazing about your style is how you are able to wear ANYTHING, you take stripper shoes, a designer caftan, broken earrings, whatever...and you truly put your own spin on it. How do you integrate things so well?
VD:My general style comes from the concept of availabism, making good use of what is readily available. I have also copied my late mother who was very fashion forward wearing underwear as outerwear decades before Gaultier.
I also love mixing inexpensive items with haute couture. Of course I am fortunate to have been the muse of many talented designers like Rick Owens, Marc Jacobs, Jill Sander, Gaultier, Thierry Mugler and Claude Montana so i have a nice collection of specialty pieces to play with.

S: You've lived in LA, spent time in NY, but now you live in Berlin. What would you say about the fashion there as compared to LA/NY?
VD:Berlin fashion is complicated. I love how its the city that every youth culture fashion movement from WWI to the present has never died. You´ll see someone dressed as a flapper and they aren´t trying to be retro. Its just their natural mode of dressing. Some people dress really conservatively like its the answer to everything, then there are others who are rave damaged. Don´t let me get started about the bad crazy colored hair, dumb tats and unflattering lip piercings.My collegue in the CHEAP art kollective Susanne Sachsse is very glamorous. She takes a lot of fashion risks and has an edgy personal style that is quite intoxicating. Berlin is best when it doesnt try to copy the boutique cities and is just itself warts and all.

S: Your blog is so amazing, and you give us so much info about your life. It reminds me of how specific and meticulous warhol kept his diary, its amazing. What do you like in a blog? Do you read blogs?
VD:I approach blogging like I am still a teenage girl writing in her diary. I credit my webmaster Larry Bob Roberts. If it wasn´t for Larry I wouldn´´t be known as one of the first bloggers. I am completely technically challenged so thank god for Larry. I couldnt have joined the 21st century without his devotion and support. I have a quarter of a million subscribers to my blog, but most of that traffic came to me accidentally because I have a sexualized name. I really don´t have a lot of time to read other blogs but the few I am able to peek at from time to time are Lady Bunny´s, Justin Bond, Ernest Hardy and fashion scribe Glenn Belverio.

S: Who are your style icons?
VD: I worship Diane Vreeland and her famous quote "There is elegance in refusal" Its the mantra I chant everyday. I also adore Donyale Luna, Grace Jones, Dovima, Verushka, Bibbe Hansen and Beth Ditto.

S: What is one trend, new or old, that you simply cannot stand?
VD: If you are going to work a Nazi youth haircut, make sure that you are first and foremost a youth. Also dying ones hair jett black or blondine when you have gnarly skin isn´t a very good idea. 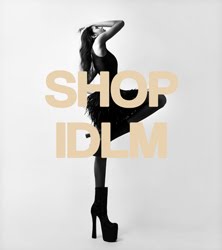